How Shoes Are Made – The History of Shoemaking 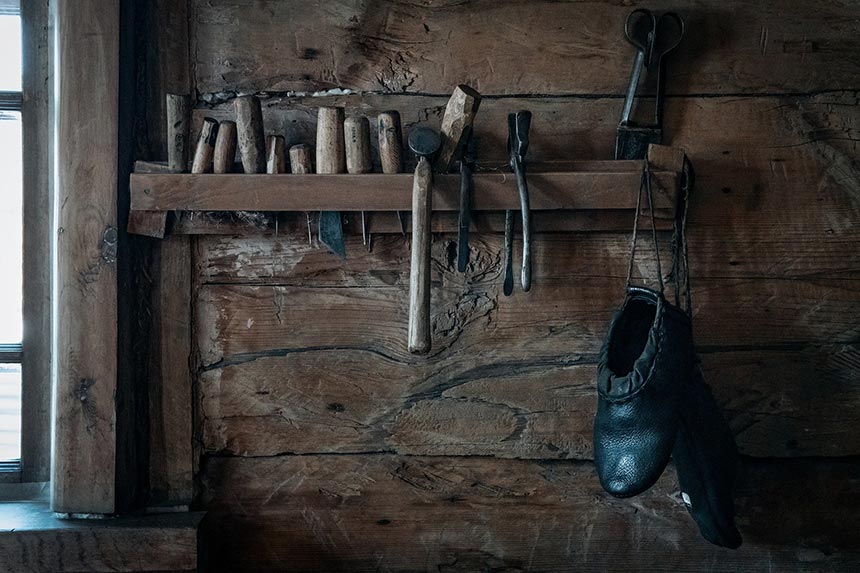 Shoes have been used for millennia to protect the feet and more recently as an item of decoration or fashion. The earliest forms of footwear were fabricated from bark, twine, and other nature-made materials. Leather shoes originated over 5000 years ago and were made from a single piece of cowhide, then fastened with a leather cord. Many modern-day shoes are still made from leather, but we also have a vast variety of other materials to choose from, and the methods for shoemaking have changed along the way.

When Was the First Shoe Made?

The earliest known shoes are sandals made from sagebrush bark and date back to 7000 or 8000 BCE. This morsel of shoe history was found in a cave in Oregon in 1938 and remains the oldest known footwear specimen. The oldest leather shoes were also found in a cave, in this case in Armenia in 2008 and are believed to date back to 3500 BCE.

It is thought that crude shoes and sandals of this style had been used for centuries, but as the construction materials were highly perishable, finding specimens is difficult millennia later. We know thong sandals were commonplace in Egypt from their presence in murals. The ancient Romans viewed clothing, including footwear, as a sign of power and status; slaves were perpetually barefoot whereas soldiers were issued various styles of footwear depending on their rank.

During the Middle Ages, the turnshoe method became commonplace for shoe manufacturing. Named for the literal method of construction, turnshoes were assembled inside-out and then turned once finished bringing the seams to the interior of the shoe. This method improved shoe manufacturing in several ways:

The turnshoe method is still used today for some specialty dance shoes and, of course, for historical re-enactments.

Around 1500, the turnshoe method was largely replaced by the welted rand method, where the upper, insole, and outsole are stitched together. Welting is one of the oldest, most labour intensive, and most durable methods of shoe manufacturing still used to this day.

Until around 1800, most leather shoes were made without differentiation for the left and right foot. Despite having been used by the Romans, differentiation was not commonplace in shoe manufacturing until the industrial era.

Shoemaking became more industrialized in the mid-18th century, though most of the work was still being done by hand. With the introduction of the sewing machine in 1846, the mechanization of shoemaking began to advance. Other developments throughout the mid to late 18th century helped shift shoemaking into a factory setting.

The Stitchless Sole – Going for Glue

The process for manufacturing a stitchless shoe was developed in 1910. Since then, various advances in materials, adhesives, and manufacturing processes have allowed manufacturers to move to what is now a very different process from where it started. Soles, which were once laboriously stitched on by hand, are now mass-manufactured and glued on by machine.

Shoes have come a long way from their origins of grass and bark. With modern-day manufacturing and materials, the shoe industry has evolved from a traditional craft into a multibillion-dollar market with a myriad of materials, styles, and purposes. For a quick overview of the modern shoemaking process, check out this video from the Victoria & Albert Museum in London.

Compression Stockings: How to Use Them
October 23, 2020

All About Socks: How to Pick the Perfect Pair
October 1, 2020

Let’s get you back on your feet!

Spend more time doing the things you love without pain and discomfort.

Join the tens of thousands of people we have helped get back on their feet in comfort and style. Come see one of our experts today to start feeling better tomorrow.
Injury Locator
Book In Today

Book a Call with Dr. Dombroski